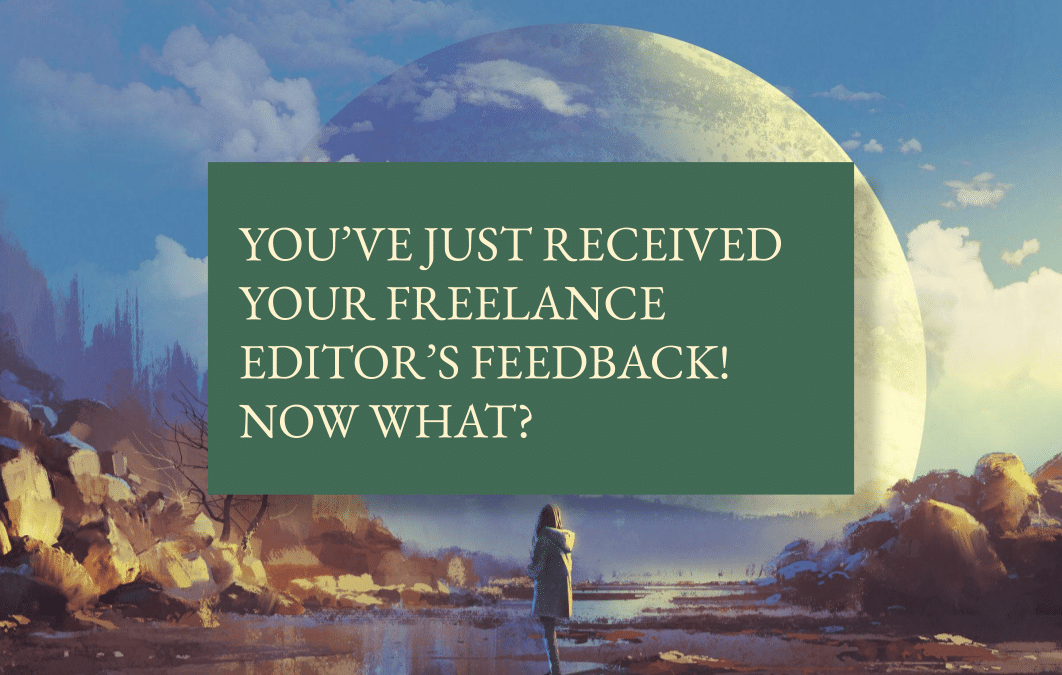 Congratulations! You’ve written a full manuscript and chosen to submit, or are considering submitting, it to a freelance content editor (a.k.a. developmental editor). After a few weeks, you’ll have in your inbox an in-depth evaluation of your work. But while we editors give plenty of advice about the story itself, we rarely advise on how to implement our suggestions.

As a content editor, I’ve evaluated dozens of stories for strengths and weaknesses to help make them the best versions of themselves. Here’s what I recommend doing after you receive your editor’s report.

Before you open that document attached to the long-awaited email from your editor, breathe – and expect criticism. Possibly a lot more of it than you imagined.

There’s a part of many writers that hopes to receive a report full of glowing praise. But that’s not what editors do. While we will point out your story’s current strengths, our job is to help you make it better, not to argue that it’s good the way it is. We focus on weaknesses and missed potential, and that comes through in our reports.

Rationally, you probably already know this, and it’s exactly what you wanted to invest in. But it’s helpful to remind yourself when the blow finally comes!

2. If you don’t understand something, ask

I have plenty of clients who want to bounce revision ideas off me after letting my suggestions sink in. What I get far less often is requests for clarification of those suggestions. And since no one, including me, is a perfect communicator, this means that authors are sometimes shying away from asking me what I meant.

There’s always more than one way to explain an issue. If the explanation your editor happened to choose for the report isn’t translating into a concrete solution in your mind, by all means, follow up on it. You can’t use advice you don’t understand.

Even if you understand your editor’s explanations of your manuscript’s problems, you won’t always know what to do about them. After all, you’re more or less the same writer you were when you submitted your manuscript for the edit. What if, for example, you see now that your protagonist needs more development but don’t feel confident constructing a character arc?

At that point, consider investing in a book, course, or other resource on the area(s) you need to strengthen in order to implement your editor’s advice. Read your chosen resources carefully, and do all the practice exercises. Think about how each concept applies to your work in progress.

Studying the craft can be much easier when you have a specific goal in mind for your learning. And, used this way, an editor’s report can become not only a diagnostic tool for one manuscript but also a roadmap for improving as a storyteller.

The internet is full of resources on every aspect of the craft. If you don’t know where to start, have a look at your editor’s blog or ask directly for recommendations.

4. When they work for you, use our suggestions

There’s no need to worry that taking an editor’s suggestions means letting them write the story for you. Most of the time, when I propose an alternative approach to a scene, character arc, or plot event, I’m only pointing out or expanding upon a parallel or connection that was already present in the story.

Stories, especially when they have strong foundations, are living things full of so many interesting connections and potentials that even the author might not notice them all. It’s one of the tasks of a content editor to help the author notice these possibilities and to show how they might result in a stronger version of the story.

It may also help to remember that your absolute, all-time favourite stories were created with the help of an editor!

Once you have an idea of the changes you want to make based on your editor’s feedback, it’s easy to assume that you’ll implement them all in a single new draft. Sometimes, though, there will simply be too much to do, and not all changes are equal in scope or complexity.

Start with the global issues – important plot points, character arcs and motivations, point of view, etc. – dedicating a whole new draft exclusively to finessing them. Ignore the smaller-scale issues for now. Your report will still be there when you’re done, and chances are, some of the editor’s lesser quibbles will fix themselves once you get the big things sorted.

Then work your way down to more scene-level issues. If your editor pointed out a confusing character interaction or a setting that feels flat, this is the time to rethink it. Start another draft.

Finally, the editor might have commented on sentence-level issues, such as faulty punctuation, wooden dialogue, writerly ticks, or lacklustre language. You guessed it – do a ‘polishing draft’ just for those.

Your manuscript might require more or fewer drafts than these. But as a default expectation, this multi-stage revision process is far more helpful and realistic than believing that a single new draft will transform your story.

Particularly if you’ve submitted a first draft, a single round of developmental editing is unlikely to make your story agent- or publication-ready. Whether it’s another round of professional content editing or comments from beta readers, you’ll want eyes on the new version. Has it come closer to the story you want to tell? If not, more revisions may be in order. Writing is rewriting.

Just as your story is yours alone, so is your editorial report yours once your editor sends it off to you. You’re free to use it however you see fit. Similarly, while this list works as a complete step-by-step approach, it can also be tailored to your needs. If your editorial feedback ever makes you freeze and think, ‘Now what?!’, come back to this list. Review the steps and see if any of the actions I’ve suggested here are what you need to gain momentum on your revisions.