What actually is a ‘scene’ in a novel? 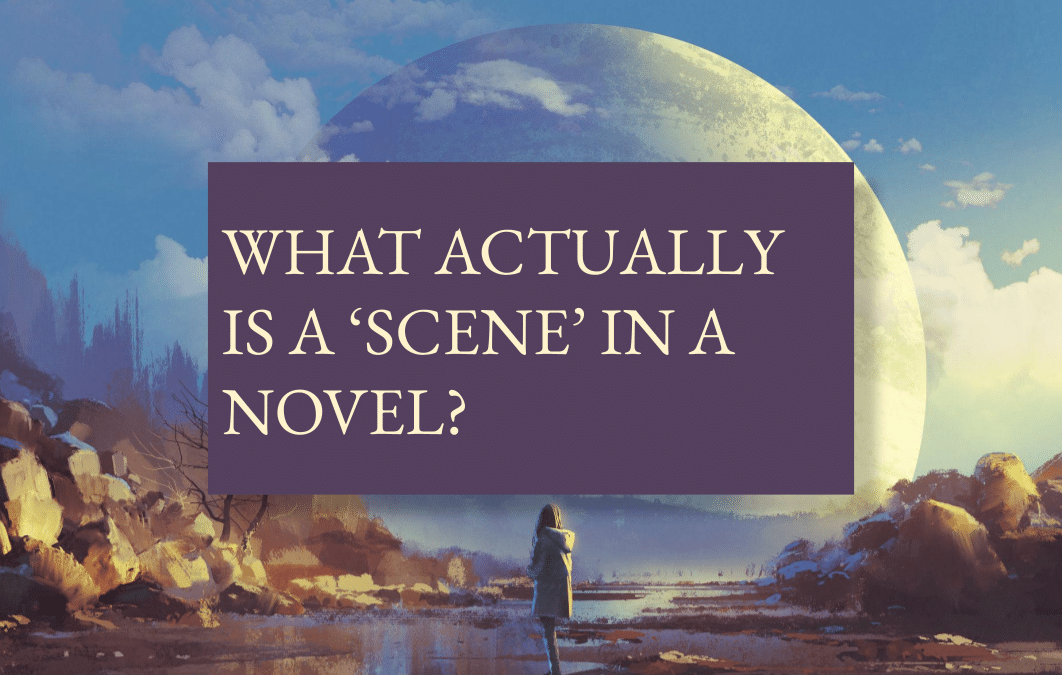 Is this a scene? If you’ve been writing fiction for long, you’ve probably asked yourself this question at some point, even if you didn’t think about it that way at the time.

If you like to plan your stories, you might have found yourself creating a list of some or all of the scenes that will go into them. Or, if you prefer to discover your stories as you go, you might have been unsure where to end your current scene and move on.

This can quickly get philosophical. After all, what even is a scene? And how do you know you’ve written an effective one?

Some authors seem to catch on to this intuitively and write in cohesive scenes from early in their learning journey, despite struggling with other aspects of fiction writing. But we all have different strengths, and others find themselves at a bit of a loss when the times comes to transform big plot points or tiny, magical moments into concrete units of a certain word count.

If you’re in that second camp, this article is for you.

To the craft books!

Let’s take a look at a few definitions of ‘scene’ I’ve come across that, while usually true, are rarely helpful on their own.

A scene ends when the narrative jumps to a new location or time
This is usually the case. It just doesn’t tell us much about what is supposed to go into each scene.

When you write a scene, get in quickly, then get out quickly
While not a definition, this does hit on a crucial aspect of scene development. Far too many new authors start their scenes far too early. They spend pages on introspective dawdling or social pleasantries before any important event or thought comes along. They also end the scene far too late, leaving readers waiting for it to finally fizzle out.

A scene is a unit of X number of words
When scouring Google for opinions on ideal scene length and investigating my favourite authors’ average scene lengths, I’ve encountered everything from ‘a scene can be a single sentence, if you do it right’ to ‘up to 5,000 words’. But most seem to agree that a suitable target is around 500-2,000 words, with some narrowing that down to 1,000-2,000, with an average of 1,500. In the end, word count depends on what the scene is meant to achieve and on the author’s style, genre, and other considerations.

For example, compared to authors of more ‘realistic’ fiction, high fantasy can’t rely much on readers’ knowledge of the world. That means they’re likely to need extra words to portray their settings, especially in more exposition-heavy scenes. (A contemporary fiction author can simply write ‘Starbucks’, and most of us will have a pre-made mental image of that setting. A high fantasy author will rarely have such shortcuts because readers know nothing about their story world.)

Scene is interchangeable with chapter
This is more of an issue of sloppy terminology on the part of some writers, but it still deserves calling out for being confusing. Chapter boundaries do not necessarily align with scene boundaries. In fact, it’s common to have multiple scenes in a single chapter. Scenes are natural units of storytelling; chapters are constructs drawn to the author’s taste.

A scene is a change
This is more helpful. But surely not just any change constitutes a scene. The change has to be one that’s relevant to the overall story and somehow moves it forward.

Two characters having a heated argument is a change – one moment, they were getting along; the next, their relationship is on shaky ground. But if they later make up before this relationship wound has a chance to impact the plot (for example, in their anger, the non-protagonist friend sabotages the protagonist friend by helping the antagonist), the change was pointless. The initial argument scene, then, is not an effective one.

A scene is an event that moves the plot forward
Now we’re getting somewhere. My only problem with this one is that it doesn’t say much about the parameters of a scene. It doesn’t tell you where to open and close it, and confusion over such things can often freeze authors up or lead them astray.

A scene consists of a scene and a sequel
The whole model of ‘scene and sequel’ is beyond the scope of this article, but suffice it to say that a lowercase-S scene is an event, portrayed via action and dialogue, and a sequel is a character’s reaction to and processing of that event that results in a decision about their next move. Scenes and sequels each move the story forward in their own way: by action or decision, by outer or inner change.

While this can be a helpful way of thinking about storytelling (which is really a series of micro- and macro-level cycles of action and reaction), it’s also a bit misleading. Why? Because a scene-plus-sequel sequence can actually take place over a range of locations, times, and smaller events. For example, in a sequel, a character in a car crash might react to the event while still trapped and bloodied in their wrecked vehicle, process the event after waking up in a hospital bed, and come to a decision about what to do next as they’re being discharged three days later. Therefore, this capital-S Scene is not the same thing as the ‘1,500-ish word unit’ or ‘event in a single time and place’ that you might be imagining.

Confused? I know. It’s a lot to take in, and applying all of these considerations to your work can make you a better writer.

But I think it’s high time we brought all this together into a quick definition of ‘scene’ that’s just enough to get you moving through your outline or draft, confident that the scene you just created is worthwhile.

My current opinion, after years of reading, writing, editing, and far too much (over)thinking about this question?

A scene is a unit of fiction that depicts a change that moves the story forward and that begins shortly before the moment of change and ends shortly after.

Here’s that one more time, with all the moving parts underlined. Consider each one as you evaluate the effectiveness of your scene concept.

A scene is a unit of fiction that depicts a change that moves the story forward and that begins shortly before the moment of change and ends shortly after.

I didn’t include anything about word count or setting. Again, that’s not because those elements aren’t relevant. I’ve just found that they often end up distracting more than helping, causing some of us (not me, of course!) to quibble over what counts as a location or time change or to obsessively watch our word count.

I’ve also left the scene-sequel model out of it because, in the end, both scenes and sequels result in what? A change. Just different kinds of change. One good thing about this model is that it reminds you that characters’ inner processing and decision-making are just as important as outer action and dialogue – both are changes that move the story forward.

There’s probably no fool-proof, objective definition of a scene. You’re likely to develop your own sense of it as you mature as an author – noticing what your favourite writers do, paying attention to your instincts while writing and revising, and making sense of guidelines like those above. In the meantime, I hope that my definition serves as a helpful pointer in a pinch.