This prologue welcomes you absolutely 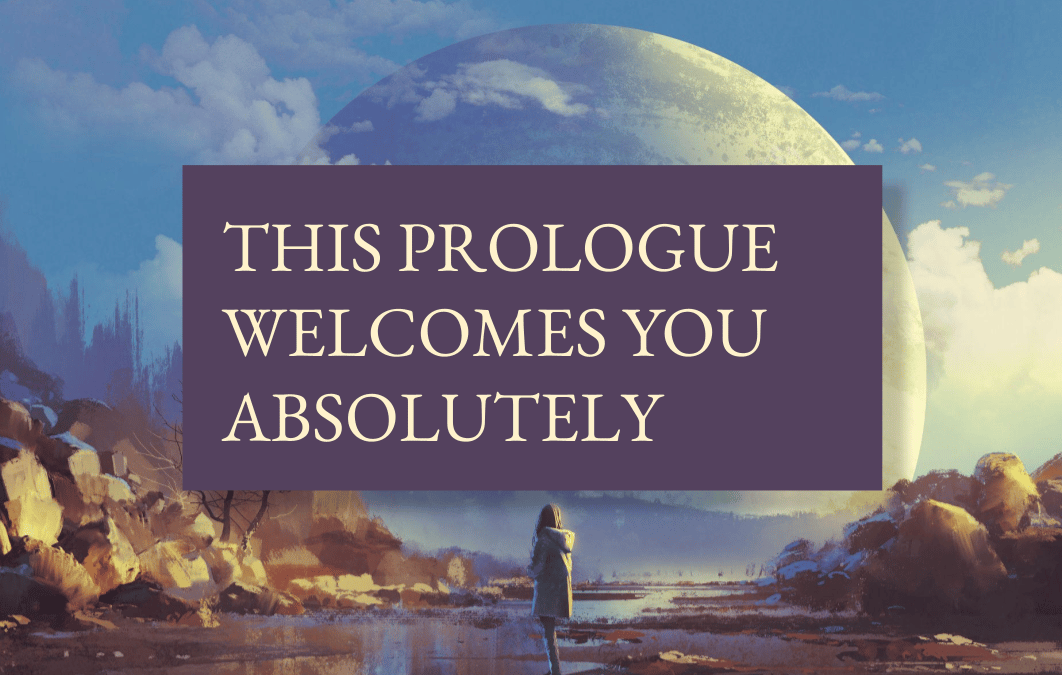 ‘Come inside and meet the prologue,’ begins Catherynne M. Valente’s science-fiction novel Radiance, from which this article takes its title. ‘The prologue is patient. She has been told often that she is wholly unnecessary, a growth upon the story that the wise doctor must cut off.’

But what is a prologue? A prologue – coming from prologos, Ancient Greek for ‘spoken before’ – is a story’s opener, which traditionally provides vital, interesting or significant insights into the upcoming story. That sounds well and good, yet the prologue has lately found itself maligned, disrespected and frowned upon. In fact, the general consensus – at least, across most social media platforms writers frequent – is that the prologue should be removed altogether.

What follows is a look into how other authors have tackled their prologues, as well as a confession as to my own leanings and how they helped me secure an agent. One thing is certain: your prologue has to say something. Too often, a writer will use a prologue as an ill-timed confetti canon launched prior to the main event, to startle and confuse, rather than explain and elucidate.

Before we get into that, let’s see how the masters of science fiction and fantasy have done it.

The worldbuilders and the lore-makers

A prologue is a chance to shoehorn in a little worldbuilding, myth-layering or lore, but only if it’s done well. Scott Lynch, a well-established dark prince of the fantastical tale, begins The Lies of Locke Lamora with a prologue titled ‘The Boy Who Stole Too Much’. Within his first pages we meet the Eyeless Priest, Chains and the Lamora boy himself, introduced as a wild, unruly child with a mystery wrapped tight around his throat. The prologue pulls the reader firmly into a slightly dirty novel with a humorous Oliver Twist turn, introducing elements of Lynch’s Venetian-style worldbuilding with such ease that reveals true mastery – and love – of the genre.

Alternatively, if we delve into a classic fantasy with J.R.R. Tolkien’s The Fellowship of the Ring, we find a prologue that is a history lesson on hobbits, their interests, dietary requirements and general demeanour. Unfortunately, this prologue is entirely skippable, unless one is a glutton for large lore-dumps prior to a book’s beginning. In fact, Tolkien’s prologue is enough to turn a reader from his novel. It does what no good prologue should do: it over-explains and lends us information we can pick up later in the book or through his other works (primarily The Hobbit).

John Scalzi’s The Collapsing Empire is a rich introduction to The Flow, a river of alternate space-time along which people travel. Alongside his epic science-fiction construction is an action-packed start and a memorable first line: ‘The mutineers would have gotten away with it, too, if it weren’t for the collapse of the Flow.’ It’s fast-paced, high-stakes and cut through with humour. The whole prologue is available to read on Tor and it is truly a lesson in character. We are rooted firmly in the perspective of Gineos, the captain of the spaceship Tell Me Another One. Here is a real slice of humanity and science-fiction done right, while gently alluding to our own upcoming challenges around climate change.

Remember, a prologue has a purpose

Often, your prologue expands on particular themes relevant to your novel, as Scalzi’s does in his environmental angle mentioned above.

In Alison Rumfitt’s Tell Me I’m Worthless there is a grim prologue that pulls us straight to the dagger-point of the author’s dark themes and societal commentary. Her clever observations leach like sickness into the first chapter, with the end to the prologue a greeting to the opening of chapter one, reflecting Rumfitt’s talents as a horror writer. If you wish to include a prologue, the reader needs to know your intention with it in order for it to have impact. Rumfitt does this with keen precision, signposting to the reader the themes within the work and what she plans to do with it – and us, the one turning the pages.

A taster of what’s to come

We all want our books to have bite, to ensnare the reader from the first page and promise them an adventure to sink their teeth into. This is especially true for young adult (YA) novels. The famous paranormal Twilight series by Stephenie Meyer begins with a glimpse into Bella’s future, showing us a despairing moment when all would be lost: ‘I’d never given much thought as to how I would die – though I’d had reason enough in the last few months – but even if I had, I would not have imagined it like this.’

It’s exciting and moody and suits the teenage tone to the now-famous vampiric romance. Of course there are dangers in loving an immortal who thirsts for blood. Meyer has told us that from the start, prior to soothing us with domestic scenes, underpinned by that first exciting opener.

Vanessa Len takes a different turn in Only a Monster, where her protagonist, Joan, is caught in a conversation about her own inheritance – her monstrous ways – which war with her childhood desire to be a hero.

When it comes to YA, these types of beginnings remain fashionable. That’s the key – knowing your genre and knowing if it needs, wants or deserves a prologue. In science-fiction and fantasy, many readers love a prologue – why, we’d gladly take your prologue out to dinner, provided we know what’s on the menu. If your writing style is dense-worldbuilding and you believe your readers will want an intense lore-drop about the habits of hobbits, then that is your call to make. You have to know your audience – and know what they want before they themselves do.

And what about the gatekeepers of literature?

You picture a literary agent, their cursor hovering over the ‘trash’ icon as they see your submission and gasp in horror as they find it has a prologue. Into the bin it goes, unread, for who would ever dare to write a prologue these days? And there go your literary dreams, lost forever. Of course, this is a ridiculous assumption. If you are writing in a genre in which prologues are prevalent – and beloved – then you’re less likely to fall foul of this strange trend. If it even is a trend. How far can you believe social media, be it #BookTok or the #WritingCommunity?

That being said, there is a reason why has the prologue is often unwanted: misuse.

Writing a prologue must be done with the same dedication as one would hope to master a sword. A prologue shines a light on weaker, undeveloped writing. If your skill with the pen is not exactly what a literary agent or editor requires, the novel will stumble upon its own poorly tied scabbard. If you can explain in craft terms what your prologue does and why it is essential, then it belongs in your book. If you can’t, cut it.

In my own journey of securing literary representation for my folklore-rich novel, I cut my prologue. I had read all the advice on how it would never get past an agent’s assistant and be dumped straight into the reject pile (or the ‘deleted’ section of the email recipient’s inbox). Funnily enough, during talks where I decided which agent go with, prologues were brought up.

‘Don’t you think this section at the mid-point should be a prologue?!’ I was asked.

I agreed. In fact, it was a prologue and will likely be heading back to its rightful place in the manuscript (well, hopefully) after edits. But would the manuscript have gotten past those large, assuming literary gates had I kept the prologue in? I think so. The agents I queried – and the ones who made offers – were knowledgeable about the genre I was writing in. Everyone I spoke to recalled my influences before I could, seeing the work and its place in the market.

That being said, I did remove my prologue and I did secure representation.

A prologue is about voice

If your voice is strong enough, you’ll know whether you need a prologue or not. We began this article with Catherynne M. Valente’s take on prologues and that’s how we’ll end, dipping once more into Radiance:

‘The prologue is the mother of the tale and the governess of the audience. She knows you have to bring them in slow, teach them how to behave.’

And how does one do that? Time and dedication. Once you’ve learned how to hone your voice and refine your words, you can forget all this advice about prologues. By that point, you’ll be able to invent your own style and start a whole new discussion about what a prologue can be in the opening pages of your novel. I, for one, cannot wait to read it.

Rebecca Ferrier is a content editor with Fabled Planet. She won the Bridge Award in 2020 and funding for her debut novel from Creative Scotland in 2021. Her recent poetry has been published in Lighthouse and west word revue. Her latest prose can be found with Gutter and The New Gothic Review (forthcoming). Twitter/Instagram: @rmlferrier