How to create the perfect monsters for your worldbuilding 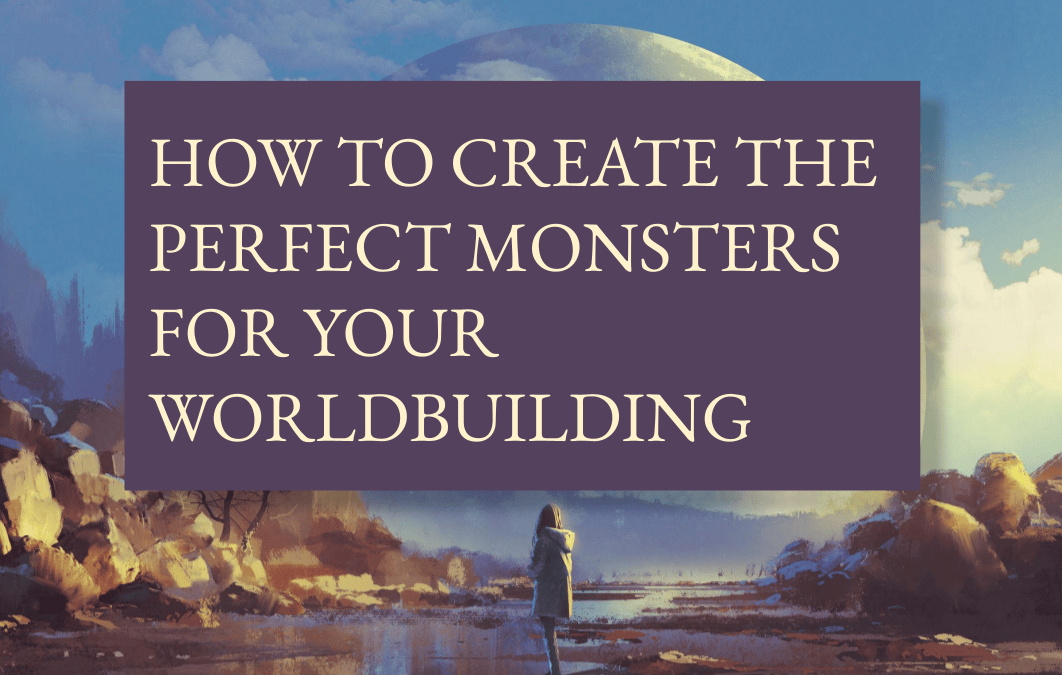 The monster is a staple of fantasy and science-fiction worldbuilding, from Tolkien’s dragons and Balrogs to Hyperion’s Shrike. It is something other and strange, often terrifying, and normally far beyond the capability or experience of normal humans – a monster is not your average bear ambling in the forest.

Some ‘monsters’ are misunderstood, some benevolent, but many serve as an aggressive foil to the protagonists in a tale: a source of tension and conflict that must be addressed. These monsters can be natural (if strange) – perhaps an alien from a distant planet or a fantastical creature taken from its home, or even an extreme version of a normal local creature. If the bear ambling through the forest is thrice the usual size and has a taste for human blood, that’s a monster! In other cases, the monster can be magical or manufactured in origin.

In fantasy and science-fiction worldbuilding, internal consistency within your world can be key to keeping your reader immersed and enthralled by your story. Here, we will talk about how to leverage the concepts of evolution and ecology to add depth to your monster design and worldbuilding – and when it is right to ignore evolution and just add more teeth!

Our modern understanding of evolution combines the pressures of natural selection with the mechanics of population genetics. In a population, there will be variation at a genetic level due to random mutation and random chance, and this leads to variation in behaviour (like being more aggressive) or physical traits like morphology (say, the shape of a beak) or physiology (like being better at digesting a certain type of food).

What happens next is pressure: predation, hunger, environment, reproduction… all the things that could go right or wrong! Some individuals will be better suited to survive that evolutionary pressure due to their variation. Over time, those individuals are more likely to survive and reproduce, leading to a population where their traits (be they behavioural, physiological, or morphological) will be more prevalent. On an island where having a beak of a certain shape makes it easier to crack nuts that are the main food source, you will end up with bird species where that beak is the most common shape. Slowly, the environment shapes the creature. Importantly, that environment includes other creatures!

So how can we apply these concepts to our monsters?

Why is your monster the way it is?

A key element is to think, why is a monster the way it is? Defensive horns and spikes can evolve due to the risk of attack from predators, or as tools to battle others. Prey animals tend to evolve camouflage or heightened senses to allow them to avoid predators. In turn, those predators must adapt, with sharper claws and keener senses!

This arms race is known as co-evolution. Predator and prey slowly build matched characteristics; host and parasite constantly vie against each other over the course of millennia.

So, why is your monster the way it is?

Often, we design monsters based on what looks cool (and this is great – who wants an uncool monster?!). But think about why the monster would have the abilities it does. For example, does it have excellent night vision because it hunts at night? Thinking about how pressures have impacted your monster’s evolution will allow you to give it interesting traits beyond BIG STRONG AND SCARY.

It will also mean those traits make sense to the reader, allowing you to hint at internal consistency within your worldbuilding. Even if your characters don’t understand evolution, your reader likely will, either at an intellectual level or at an instinctive level. Showing them that this creature from a land of other terrible predators has a hide tough as iron will make sense to them, and make your monster more believable.

Next, consider the ecological context your monster came from. Is it from a land full of other brutal predators it must compete with, or a harsh environment? What is a perfectly natural creature in one environment might be utterly monstrous in another. A polar bear on the arctic ice is part of the food chain, an apex predator fighting the brutal wilds; a polar bear in your local supermarket is a nightmarish monster. This kind of fish-out-of-water scenario can be excellent to drive conflict with monsters (or explain why a monster exists in a context that doesn’t seem appropriate to it).

An excellent example is China Miéville’s Perdido Street Station, in which a nightmarish creature called a slake moth begins to hunt the citizens of a city. This slake moth has evolved in a far and brutal land of high magic and strange creatures, but in the urban sprawl of Miéville’s metropolis, it is stripped of competition, and its new prey have not been part of the evolutionary arms race that produced it. Whilst its natural prey may have co-evolved defensive measures against its strange powers, the citizens of New Crobuzon are wholly unprepared.

This ecological information can also be used to your creature’s disadvantage. In an unfamiliar environment, traits that would have been beneficial in its home might offer no boon, or even cause it problems! Think about where your monster comes from. Does it exist in packs, or alone? What is its life cycle? What does it eat? Where does it sleep? This kind of information will inform how the monster behaves within your story, and the internal robustness of your system will keep readers immersed.

Of course, we’re talking about fantasy and science-fiction. Many monsters are not the product of evolution – they are the product of magic, divine intervention, or human or alien bioengineering. James Cameron’s titular alien is a bioweapon: an efficient killing machine. But even within that context, we understand its lifecycle. Bioengineers always steal from nature, and often, the best way to engineer a predator is to reflect on traits that millions of years of natural selection have homed in on.

However, if you’re creating an engineered beast, then the only limitation is the imagination of the engineer. In terms of magic, this can exist as another natural element of selection pressure (in a world where magic abounds, magic itself is natural). How would the magic in your world affect the evolution of predators and prey and the ecosystems they exist within?

Some creatures are also magical in that they are apart from the natural order. The dragons bred by Morgoth in Middle-Earth are magical bioweapons. We don’t know their life cycle, or any environment where they might exist without that guiding hand creating them. As such, the constraints and pressures of evolution do not apply.

Understanding these basics of evolutionary theory and ecology can help you take your monster and add a layer of believability. Plus, the natural world can be an excellent inspiration for incredible traits to give to your monster, to challenge your characters and shock your readers! If our world has octopuses that can change colour, shrimp that can shoot stingers faster than a bullet, and insects with toxins that will leave a person screaming… what might there be in your world?

Ian Green is a science-fiction and fantasy writer from Northern Scotland. He is the author of The Rotstorm epic fantasy series, which began with The Gauntlet and the Fist Beneath. His short fiction has won the BBC Radio 4 Opening Lines competition and the Futurebook Future Fiction prize. Visit his website here.