How K.S. Villoso nailed character voice in The Wolf of Oren-yaro 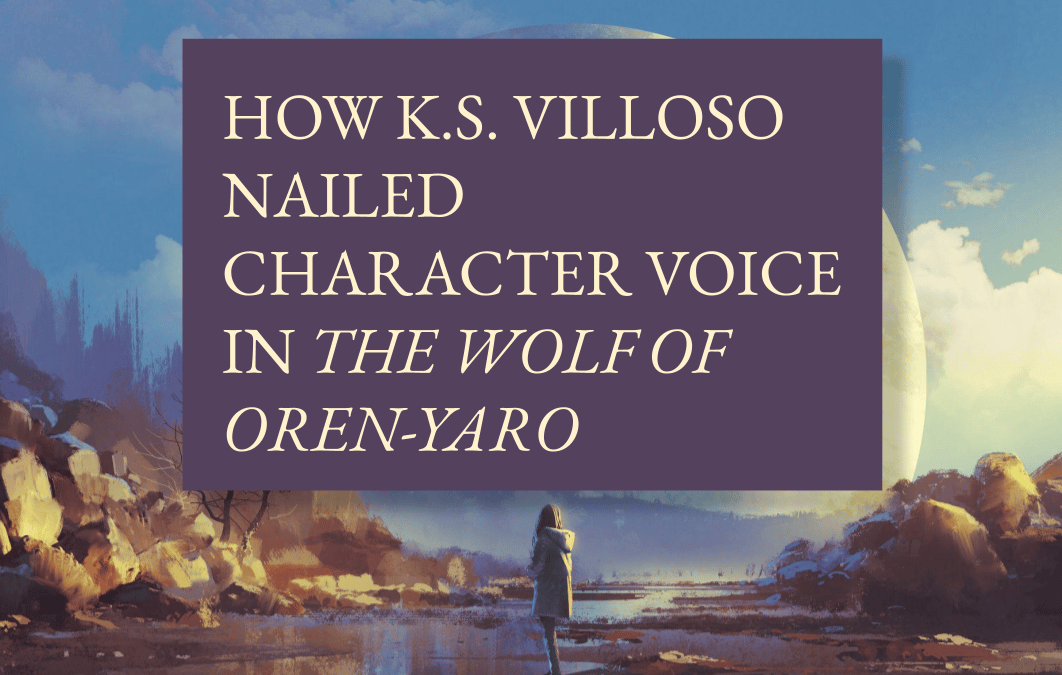 Voice may be one of the most elusive aspects of storytelling, yet we all know a good voice when we read one. When the voice is really good, we may even notice it from the very first line or two – as I did when I started reading K.S. Villoso’s The Wolf of Oren-yaro, the first volume of the Chronicles of the Bitch Queen.

Researching the book, I quickly found I wasn’t the only one. From the novel’s blurb to its reader reviews, what I saw praised more than any other aspect of the novel was the “powerful” and “exciting” voice of Villoso’s narration from the first-person perspective of the her protagonist, the fierce yet vulnerable 26-year-old Queen Talyien.

The Wolf of Oren Yaro is a brilliant example of effective use of voice in recent speculative fiction. But what exactly makes it work? While voice really is one of those things that becomes more difficult to define the harder you try, I’ve extracted four tips from Villoso’s work that we can all apply to our own efforts to nail our characters’ voices.

Include details that this character would know or notice

After the voice itself, one thing I noticed right away about Villoso’s narrative was all the place names and references to political squabbles, signs of economic prosperity or decline, and resource flows among the nations. Talyien comments on these often in her thoughts as she sneaks out of her own land and arrives in a foreign city in the first act. While these details may have seemed unusually heavy at first, they became easy to appreciate when I remembered an obvious fact:

In a well-written voice, the character’s senses – and therefore the sensory details included – are attuned to information that they as a unique individual would pick up on. Most rulers wouldn’t simply visit a foreign city and gape at the sights and bustle like a tourist or a child. They’d look for what they know, the kinds of data they deal with every day, and make judgments about the city accordingly.

All characters have specialities like this – not only based on their occupations, but also stemming from their personalities, interests, and upbringings.

Note, though, that Villoso couldn’t have achieved this realism without knowing a lot about Talyien’s world herself. This, then, is another lesson: once we know what’s most important to our character, we can focus our worldbuilding efforts there so we can confidently infuse our character’s voice with observations based on that area of interest.

You can absolutely base a voice around a single character trait, and it’s common in minor characters.

For example, you might have that one drunken bully in the tavern who’s always looking for a fight, and all of their outbursts and reactions are rooted in their aggression.

Or that chronic worrier whose every utterance raises a fearful doubt about the topic at hand.

But, just as in every dimension of characterisation, for a main or point-of-view character whose voice needs to colour the narrative, we have to dig a bit deeper to keep readers interested. In The Wolf of Oren-Yaro, Villoso makes Talyien’s wolf-like fierceness clear from the start. Her voice is direct, often brutally honest, and contains an underlying note of ‘You got a problem with that?’

But, particularly in scenes involving her first love and husband, Rayyel, we see another, contrasting side of her voice: the romantic. While retaining her usual directness, her narration becomes more focused on the personal and emotional.

And once we see that romantic side – the one that still speaks of Rayyel in adoring terms even though their relationship is in shambles – it becomes easier to notice that her whole narrative is actually a balance of action-oriented hardness and deeply vulnerable introspection. She doesn’t look upon emotional matters dispassionately, as we might expect from her hardness; instead, her voice is versatile enough to incorporate a softer dimension.

There are many ways such balance can be used to create complexity in a character. For instance, let’s consider an apparent opposite of Talyien: a sensitive artist character whose voice is full of poetic introspection first and foremost. But perhaps the poetry is there only when they’re focused on their art. When they’re forced to go out and about in mundane routine, their language might suddenly become stilted, negative, complaining, noticing the ugly rather than the beautiful.

Such contradictory traits in a single voice, especially when different traits show up in specific circumstances or around certain topics, can give a voice a fascinating dynamism that promises the reader a deep and interesting character.

I try to give my characters a mantra that guides them through life. And I find that in challenging myself to create a sentence or a line that guides my characters, it really helps me understand who they are. So, for [Schwab’s thief character] Lila Bard, it was ‘If a thing is worth having, it’s worth taking.’ And it’s just one line, but it defines so much of who she is.

Readers will see from page one that Villoso clearly has a kind of mantra for Talyien: she makes repeated statements in the narrative about what a wolf does or does not do, applying those principles to what she will or will not do.

But in addition to allowing this mantra to guide the characterisation of Talyien behind the scenes, Villoso also puts it on display in the narrative to enhance Talyien’s voice. Throughout the book, we see variations on this idea:

Throw the wolf into a sea of sick deer—whatever will she do?

A wolf of Oren-yaro fights to make it right, down to the last breath.

This can be a (relatively speaking) quick and easy way to permeate a narrative voice with a character’s energy. Once we establish what the mantra means to the character, likely by showing how they came to adopt it in the first place, repeating it in the narrative at relevant moments not only reminds readers what this character is all about, but also helps them see the events of the story through the lens of the character’s philosophy.

It’s a way of letting the character personalise their own narrative in a small but effective way, like a signature on a painting.

(It can also be used, as Villoso uses it, to deliver a gut punch in the final lines of the book, one that also makes the reader feel that the story has come full circle!)

Give the other characters unique voices, too

While it’s possible for one character’s voice to stand out in a sea of weaker ones, creating a compelling voice is generally easier when readers can experience and appreciate it in contrast with the voices of other characters.

A friendly character’s kindness becomes much more noticeable when repeatedly pitted against another character’s surliness. We might not even take note of how confident one character is until we see them encouraging someone else who’s far less so. When readers see what makes a character different from others, they come to life – and that often happens through their words as much as through their actions.

To create such effects for the main or point-of-view character, however, we first have to give the other characters in the cast unique voices, too.

Villoso certainly does this, especially in the contrast between Talyien’s voice and those of her two love interests. One of them, her estranged husband, has a voice of quiet, dry intellect. Talyien’s intensity and passion become more obvious when bouncing against his persona of impassive calculation.

The other is a charming, common rogue whose every line is infused with a carefree but solid suaveness – a good counterpoint for Talyien’s seriousness and defensiveness.

I highly recommend giving The Wolf of Oren-yaro a read to see how, even putting the characters’ actions and arcs aside, these traits come out through their voices alone.

In an interview with The Fantasy Hive, Villoso calls Talyien ‘probably the most overwhelming, frustrating, and ultimately intense character I’ve ever written’.

When a writer feels such strong emotions while writing a character, it’s much more likely that the character will elicit strong emotions from the reader, too. Strong characters create strong voices, so when we as writers are gifted by the Muse with a connection to a character with traits that are irrepressible, we’d likely benefit from leaning into that character’s voice and letting it help carry the story as a whole.

It may be that the best character voices are born just by listening to the voices in our heads.

Finally, while Villoso chose to write The Wolf of Oren-yaro in first person, note that all of these ideas apply to third-person point-of-view stories, too. (See Joe Abercrombie’s First Law and Age of Madness trilogies for recent examples of excellent third-person voice.)

Whether we do it in a deep third-person point of view that’s like first-person in all but pronouns or in a more distant point of view in which the point-of-view character’s voice pierces the narrative only at the most effective moments, all stories can benefit from the power of a fully realised character voice.