Hard versus soft magic system: which is better for your fantasy novel? 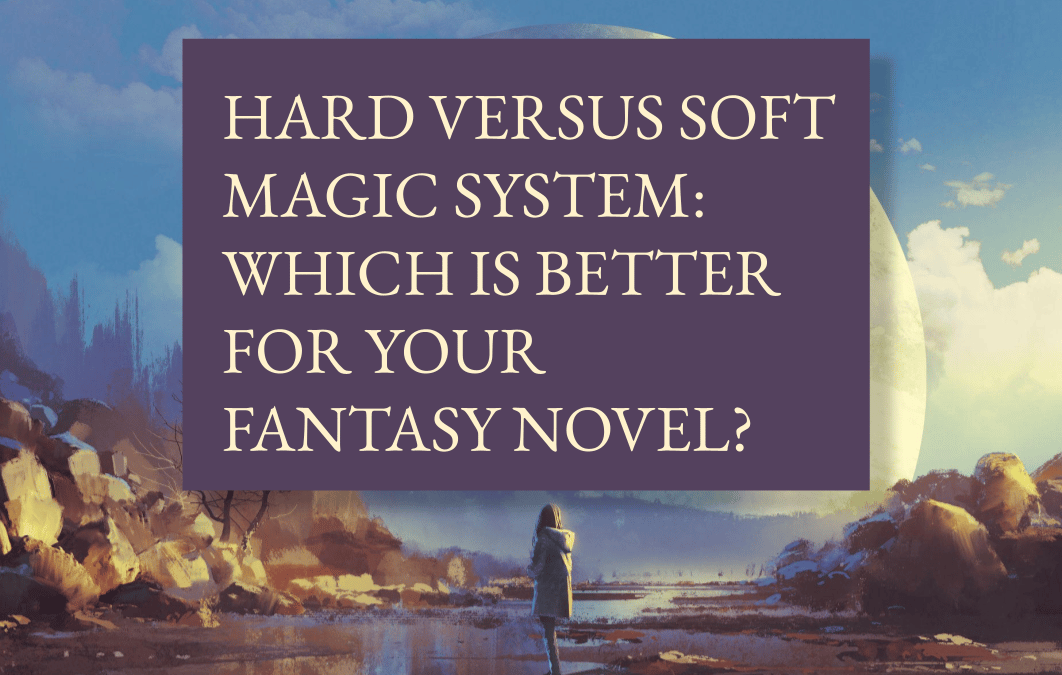 Hard magic and soft magic are two terms that get thrown around often in the fantasy writing community. But even if you know that these terms mean – don’t worry if not; we’ll go over it – you might still be left wondering what implications these categories have for your own magic systems. How do you know which is right for the story you want to tell?

In this article, I’ll share the one factor most likely to help you choose the right kind of magic system every time and what that choice means for your story.

What is a soft magic system?

Classics such as C.S. Lewis’ The Chronicles of Narnia and J.R.R. Tolkien’s The Lord of the Rings are often the go-to examples of the softest magic systems. In these stories, the protagonists often don’t use magic, and the characters who do are mostly villains, such as Sauron or Queen Jadis (the White Witch), or distant, mentor figures, such as the god-lion Aslan or the mysterious wizard Gandalf.

As a result, how the magic works – its capabilities and limitations – remains relatively opaque to the reader, and the author usually frames it a delightful (or chilling) surprise when the magic makes an appearance, which is not likely to be often in a very soft-magic story.

This approach is great for imbuing the story with a sense of wonder and possibility. When it’s done well, readers are likely to feel that the mystery of the magic is part of the experience of the story and its world. To try to look ‘under the hood’ would be to, at best, miss the point and, at worst, ruin the magic.

What is a hard magic system?

High fantasy author Brandon Sanderson is considered by many to be the king of hard magic, with his clear, rule-based systems reminiscent of Dungeons & Dragons gameplay. His primary characters tend to be magic-users, and the reader gets an inside look into how the magic functions – what a character can and can’t do with it, where it comes from, and the cost of using it.

As a result, the magic system ends up feeling more known to the reader. While it can still be epic and retain some sense of mystery, it feels more like a tool in a character’s hand than an unpredictable force of nature or sign of unimaginably great power.

Hard magic also often – but not necessarily – comes across as more rational than soft magic. After all, if the reader knows how the magic works, they’re more likely to pick up on its patterns (whether you as the author intended them or not) and try to make predictions based on these. They’ll sense if the author is cheating by breaking these patterns and be impressed when a character finds an unexpected way to work within the system’s limits.

This is often part of the fun of hard magic: working through the intellectual challenge that the system presents makes the reader feel smart, as if they too share a bit of the character’s skills.

So, which one is better for you?

It’s important to remember that one type of magic system isn’t inherently better than the other. As you can see from the descriptions above, the choice between hard and soft magic is more a matter of character (and therefore reader) perspective and knowledge, which in turn affect the story’s tone, not of the quality of the magic system itself.

There is, however, one crucial question you’ll need to answer when deciding which direction is best for the story you’re writing.

Will my protagonist use magic to solve a big story problem?

That’s right. Hard versus soft magic is a question of plot first and foremost.

If the answer is yes, you need a harder magic system.

If the answer is no, you need a softer magic system.

You’ll find some stories that appear to be exceptions to this idea. The magic system of the Harry Potter series, for example, is on the soft side, yet protagonist Harry engages in climactic magical duels, seemingly solving the plot’s biggest problems using magic. However, success in those battles doesn’t come from the magic system itself, but rather from an emotional breakthrough, support from mentors or artefacts, or an non-magic-related insight. He doesn’t win because he figures out some new combination of spells or masters a complicated ritual; rather, other factors come together to give his magic more power or to turn the antagonist’s magic on itself. When Harry studies magic at Hogwarts, we don’t spend much time learning its rules and limitations along with him, and that’s because we don’t need to know.

The point of answering this question isn’t to stick a neat little label on your magic system. That’s not going to help you write a good story, and your magic system will likely fall somewhere in the middle of the hard–soft spectrum anyway. So what is the point?

Once you know whether your magic system is overall hard or soft, you know, among other things, (a) how you can use it in the story, (b) how much of it you have to show of its workings to the reader, and (c) how you need to make the reader feel.

Let’s say your character is a magic-user, and you want the climax to centre on them successfully creating a new ritual to defeat the antagonist. Readers of this hard-magic story:

On the other hand, let’s say you’re writing a portal fantasy in which a protagonist stumbles into another world, some of whose inhabitants are magic-users, and must rely on their wits and morals to get back home. Readers of this soft-magic story:

In short, whether your magic system is harder or softer (based on the question above) has implications for the story that can leave you with an unsatisfying story if you’re not aware of them. When you are aware of those implications and how they work together, you know some important things that need to be done in your story to make it work.

I use the core question above because, in the early stages of a project, a writer is likely to already have ideas about the problems their protagonist will face, while things like the fine details of worldbuilding (which includes the magic system) and the story’s tone come later. But maybe that’s not you.

If you’re not sure yet if your protagonist will solve big problems with magic, try what applying what you’ve learned here from a different angle: Do you have theories and lore about how your magic system works or where it comes from? Or like the idea of challenge your readers to solve interesting puzzles? If you answered yes to either, you’re probably looking at hard magic. Do the inner workings of your magic feel irrelevant to the story? Or do you feel passionate about evoking a sense of wonder in the reader? Then consider playing to your current strengths with softer magic.

What you do with the kind of magic system you choose – how powerfully you make the reader feel that sense of wonder or intellectual challenge – is where you need to bring all of your skills, rather than attempting to create the most complex or most unpredictable system possible. And that’s something you might not get right until the revision stages.

Meanwhile, when you’re in the process of actually building your magic system, probably during outlining or the early drafts, make the magic’s role in solving your characters’ big challenges the main factor guiding you toward hardness or softness, while being aware of how these choices will affect your story’s exposition and emotional impact.