8 types of inciting event for your next fantasy story 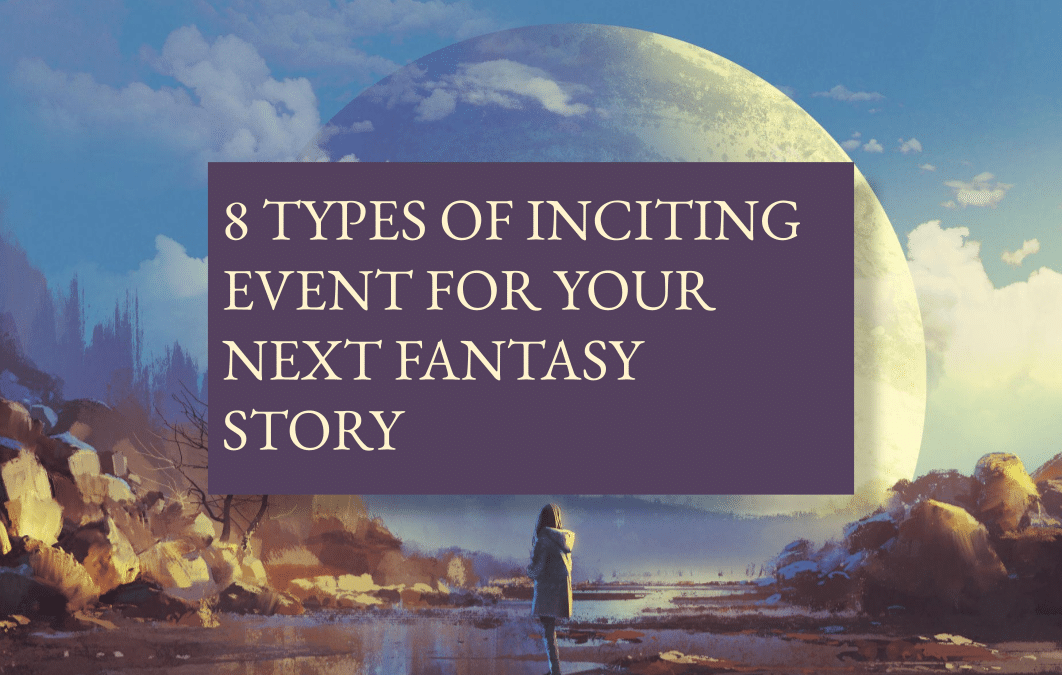 Do many of your fantasy stories start in a similar way? Perhaps with the protagonist witnessing a loved one being arrested, abducted, or killed. Or discovering a magical power they inherited from a mysterious, long-lost parent. Or being chosen to embark on a heroic quest that will ultimately decide the fate of the world.

The inciting event is crucial, not only as a plot point but also as a hook for readers, even on the back-cover blurb. It’s a writer’s ideal chance to showcase what’s interesting about the characters, setting, or themes.

Well-worn inciting events like the examples above can work. But it pays to choose an event that’s ‘right’ for the specific story, rather than a quick-and-obvious way to get the plot moving.

For your next story, consider one of these eight types of inciting event.

The protagonist finds a mysterious object

In Death Note, a manga by Tsugumi Ohba and Takeshi Obata, Light Yagami, a bored teenage genius, finds a notebook that gives him the power to interact with its shinigami (death god) owner and kill people by writing their names on its pages. The plot follows his use of this power to rid the world of criminals and become its new ‘god’, all while evading the police.

This type of inciting incident can speak to the role of chance in our lives. Light is no Chosen One – his fate is decided by a random encounter with a weapon brought to the world by an indifferent god, at a moment when he happened to feel contempt for humanity. Other characters comment that, despite the power it gives him, he’s unlucky to have crossed paths with such an object. If your story explores themes of (positive or negative) coincidence, an inciting event like this may be a great choice.

It’s also excellent for low/urban fantasy stories. In a world like our own, coming into possession of a single magical item can give a character a great deal of power.

The protagonist stumbles into a mysterious place

A famous example of this one is C.S. Lewis’s The Lion, the Witch and the Wardrobe. Lucy finds the land of Narnia in the back of a wardrobe during a game of hide-and-seek. Another classic example is Lewis Carroll’s Alice’s Adventures in Wonderland. In that one, though, protagonist Alice enters the mysterious place more intentionally (by following her curiosity about the white rabbit), which is also an option.

Both of these stories are known for their themes of wonder. This type of inciting event is perfect for stories that you want to evoke that emotion. It reminds us that wonder might show up when we follow our curiosity, or it can sneak up on us totally unawares.

How the protagonist enters the mysterious place can also tell the reader a lot about their situation or character. Alice’s curiosity shows that she’s inquisitive, an important character trait for her story. Lucy finds Narnia while playing with her three siblings, who are also important characters in the novel. Perhaps your character enters their mysterious place while fleeing some plot-relevant danger, trying to talk to an attractive stranger, or investigating an ancient artifact. All these events that can become relevant to the plot down the line.

In the Disney/Pixar film A Bug’s Life, Flik’s story begins when an invention meant help his colony gather food ends up ruining the harvest. His mistake not only puts the social approval he craves further out of his reach than ever, but also puts his entire community in danger. He’ll spend the rest of the film trying to fix things.

Failure can be a great kick-off for characters with a need to prove themselves. That could mean making up for the one big mistake in the inciting event or a lifetime of screw-ups.

It can be just as effective for protagonists who are accustomed to success. (Think of the perfect student failing a test for the first time.) Or characters whose dreams are riding on a single event going their way. Stories that begin this way might centre on themes of perseverance and identity crisis.

The protagonist loses something important

In Marvel’s Doctor Strange, Stephen Strange’s inciting-event loss would be devastating for anyone but is life-ruining for him. When his hands are mangled in a car accident, his career as a renowned surgeon is over. It’s the end of life as he knows it, but the beginning of his superhero origin story.

Loss is a big catalyst for personal change. Accordingly, transformation is likely to show up in the themes of stories that begin this way, as well as starting over. Fantasy has the potential to explore transformation more literally than most other genres. Inner evolution can be exteriorised as, for example, new magical abilities or shapeshifting. This can make such themes even more powerful.

The protagonist undergoes a physical transformation

Transformation can be the result of a story, but it can also be its catalyst. Studio Ghibli’s film Howl’s Moving Castle is an example of this. (The plotting changed a bit from the original novel by Diana Wynne Jones, which has a different inciting event.) Young protagonist Sophie’s life is relatively ordinary until a curse from a mysterious customer in her hat shop turns her into an old woman.

The thematic reasons for Sophie’s transformation are up for interpretation. But it may, like many physical transformations in stories, be symbolic of the character’s self-image. This can lead to explorations of related topics such as self-esteem and vanity. In other stories, the transformation helps the protagonist overcome some prejudice against others with a similar physical form by forcing them to walk a mile in the other’s shoes.

Thanks to magic, any physical transformation can be possible – and reversible – in fantasy. Why not take advantage of this potential and play with it?

The protagonist takes on a mission out of self-interest

Fantasy is full of quests to save a person, a people, a world – but this is not the only option. Missions can also be taken on for cash or some other life-enhancing prize that won’t save anyone. Leigh Bardugo’s Six of Crows is a heist story that begins with Kaz Brekker accepting an impossible kidnapping job for thirty million kruge (the currency of his land).

As a ruthless gang leader, Kaz is something of an antihero, and this inciting event is a fantastic way to establish him as such. His aim is money, and his mission will not save the world, but help a greedy businessman mass-produce an addictive substance. If your protagonist is more self-interested than traditionally heroic, ask your character what shining prize would get them into action. (It doesn’t have to be money!)

Thematically, the antiheroism in this type of inciting event can lead to a sense of me/us-against-the-world. This opens up opportunities for the protagonist to, for example, shift into a more selfless way of being, find a person or group worth being loyal to, or become more hard-hearted than ever. Such an inciting event also shows that the protagonist is motivated by a strong goal or desire – their prize waiting at the end of the mission – signaling a proactive and interesting character.

One of the bestselling books of all time, H. Rider Haggard’s She opens with Professor Ludwig Horace Holly being persuaded to adopt a dying acquaintance’s son. That son comes with a mysterious box that’s not to be opened until the boy is twenty-five. Its contents lead Holly and his now-grown son on an adventure into the wilderness of Africa to learn the truth about an immortal queen who murdered the son’s ancestor in ancient times.

As in She, there can be a strong element of discovery in such stories. If the protagonist inherits an old house – or a whole dominion – much of the plot can be dedicated to exploring its secrets. If they’re thrust into leadership of a new team or community, discovering the dynamics among its members, both allies and enemies, will likely be crucial. If they become the owner or caretaker of a high-maintenance creature, then keeping up with its antics and developing a relationship with it can be a great source of conflict.

In fantasy, the stakes are often raised in situations with so many unknowns. Adopting a puppy is one thing; adopting a dragon hatchling is quite another. New acquaintances can harbour hidden powers and otherworldly motivations. Even seemingly inanimate objects can be revealed to be sentient and potentially dangerous.

The protagonist undergoes a rite of passage

The plot of Kiki’s Delivery Service, by Eiko Kadono, kicks off with a young witch, Kiki, leaving home on her broomstick to make a life for herself. This is a rite of passage that all the witches in her family have completed and that helped them become who they are.

Obviously, this type of event can be an excellent way to start a story with coming-of-age themes. (And that doesn’t mean the protagonist has to be young! Consider what rites your world might have for adults, even the elderly.) It can also be a brilliant opportunity to showcase your worldbuilding. A culture’s rites of passage can tell us a great deal about its people, their environment, and what they value.

The inciting event is the one major plot point in the typical story structure that often happens entirely to the protagonist, rather than being somehow caused by their own actions. After all, stories are brutal on their characters. It can be unrealistic to have protagonists willingly leap into their perilous narratives.

But, as these examples show, that doesn’t mean the inciting event can’t be a powerful symbol of character, setting, or theme.