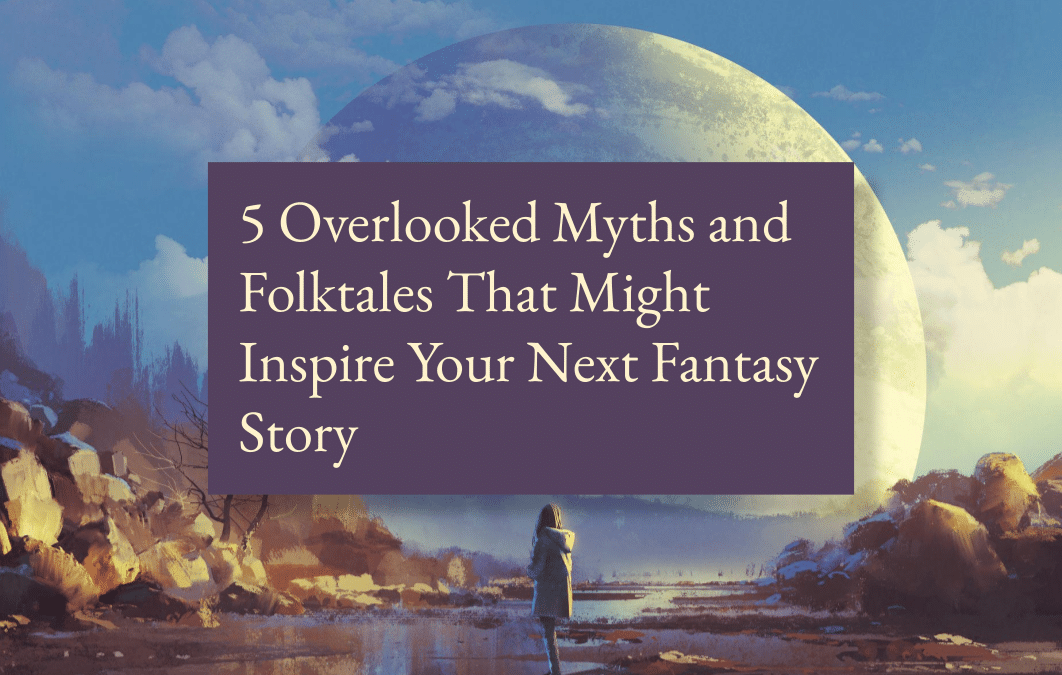 Myth and folk and fairy tale retellings are a popular fantasy subgenre, but the same handful of stories are often recycled. In this article, we’ll look at some uncommon ones that have strong dramatic potential.

1. Phaeton and the Sun Chariot

Long Story Short: To prove to his peers that he’s the son of Helios, Phaeton vows to do the impossible: drive Helios’ sun chariot across the sky. Helios allows it but warns him to not, under any circumstances, use the whip. Guess what he does? Yes, Phaeton, in his pride and thirst to win, uses the whip – and loses control of the sun. This results in him being struck dead by one of Zeus’s lightning bolts and the earth falling into a climate crisis that can’t be easily fixed.

Why This Story? Even beyond the climate change metaphor, this story is full of drama. Phaeton is a compelling protagonist: he has a goal he’s willing to risk his life to achieve, he has a lesson to learn, and he probably has an inner lie or weakness that drives him to do what he does. His relationship with his father, Helios, would also be interesting to explore, as well as the lore and power dynamics around the sun chariot.

2. Why the Sea Moans

Long Story Short: A lonely princess named Dionysia makes friends with a sea serpent named Labismena. After saving Dionysia from an unwanted marriage and setting her up with a handsome prince, Labismena reveals that she is actually a human stuck in a serpent’s body due to a curse that can only be broken if the happiest girl in the world, at the hour of her highest happiness, calls her name three times. Dionysia promises to do this on the day of her wedding to the prince, when she will be the happiest girl in world. But once she actually meets the prince, Dionysia has eyes only for him and, on the wedding day, forgets to call out her friend’s name, dooming Labismena to life as a sea serpent. The sound of the sea’s moaning is said to be Labismena’s despairing cry of Di-o-ny-si-a! Di-o-ny-si-a!

Why This Story? Who hasn’t once felt a little ignored by a friend with a new romantic partner? Even the closest friendships can be shaken by it. This folktale takes that common relationship conflict and increases the stakes tenfold. And if the story is reimagined as a potential love triangle, even more possibilities open up!

Long Story Short: While on a journey, a young man named Minokichi and his master, Mosaku, spend a frigid winter night in a ferryman’s hut. When Minokichi awakens in the darkness to find that the door has opened and let the snow and cold in, he turns to Mosaku… only to find a woman dressed in white chilling his master dead with her cold breath. She spares Minokichi only on account of his youth and beauty – but makes him promise to tell no one what he has seen. Later in life, Minokichi meets and falls in love with a maiden named Yuki (the Japanese word for ‘snow’). After they’ve wed and had ten children together, he tells her that she reminds him of a beautiful woman in white who killed his master when he was young. At these words, Yuki rounds on him and scorns him for breaking his promise to never speak of that night to anyone. ‘Were it not for our children, I would slay you,’ she says. ‘And if they ever complain of you, I will do it still.’ Then she transforms into a white mist and disappears for ever.

Why This Story? There’s a lot going on under the surface, particularly character motivations that could be interpreted in different ways. Why is Minokichi’s promise so important to Yuki – who’s actually ‘Yuki-Onna’, the ‘snow woman’ – to the point that she leaves him and their children, all of whom she genuinely loves, because of it? Does Minokichi fall in love with Yuki partly because she reminds him of Yuki-Onna? Does he begin to suspect the truth about his wife at some point? Why does he break his promise despite Yuki-Onna’s fearsomeness?

Long Story Short: The young warrior Sigurd kills a dragon and gains two magical powers: he can communicate with animals, and he becomes invulnerable, excluding one spot on his shoulder. Some birds tell him that his foster-father, Regin, will kill him and take the dragon’s gold, so he kills Regin instead, stealing a gold ring from his treasure. Later, when he crosses the Bifrost to visit the Valkyries, he falls in love with a shieldmaiden among them named Brynhild and gives her the ring. Unfortunately, the ring is cursed, and Brynhild suffers for it when Sigurd accidentally drinks a potion that makes him forget her and falls in love with another woman. In a jealous rage, Brynhild has Sigurd killed by persuading his new lover’s brother to stab him in his weak spot. She is then overcome with remorse and throws herself onto Sigurd’s funeral pyre.

Why this Story? Though this tale centres on Sigurd, look closely, and you’ll find a whole cast of interesting characters. Cunning and greedy Regin. Fierce and vengeful Valkyrie Brynhild, who goes from love interest to villain. Sigurd’s new lover, Gudrun, and her brother, Guttorm, both children of the foreign King Gjuki. Guttorm might have been close friends with Sigurd; how did Brynhild persuade him to kill the other man?

Long Story Short: Romulus and Remus are twin brothers whose mother is a vestal virgin and whose father is Numitor, the king of the city of Alba Longa. Unwanted, they are sent down a river in a basket and, upon reaching land, suckled by a she-wolf until they’re found and adopted by a shepherd and his wife. They grow into natural leaders and become involved in a dispute between Numitor and a rival king who now sits the throne. When Remus is captured and taken to Alba Longa, Romulus rescues him, and in the process, the brothers learn their true identities. They help Numitor regain the throne – and decide to found a city of their own. By this time, a rift has formed between the two, and their dispute about on which hill they should build the city leads to Romulus killing Remus. Romulus founds Rome and rules as its king.

Why This Story? Stories are usually about change and transformation, and this myth has plenty of that. Not only is it a perfect rags-to-riches story, it charts a fundamental shift in the brothers’ relationship. The story ends with Romulus slaying the same brother we see him rally to save earlier. What changed between them? It’s safe to assume that their fatal argument wasn’t just about a hill. So what was it about?

Often, it’s the dramatic scenario that’s borrowed from legend – a great tragedy caused by a haughty son desperate to be acknowledged as his important father’s child, twins whose seemingly unbreakable bond is snapped by the challenges of founding a new city (or company, restaurant, space colony, etc.), a romantic relationship with a mysterious, murderous stranger…

These stories continue to fascinate us today precisely because of the timelessness that makes such adaptation possible.