5 awkward questions to ask about your magic system 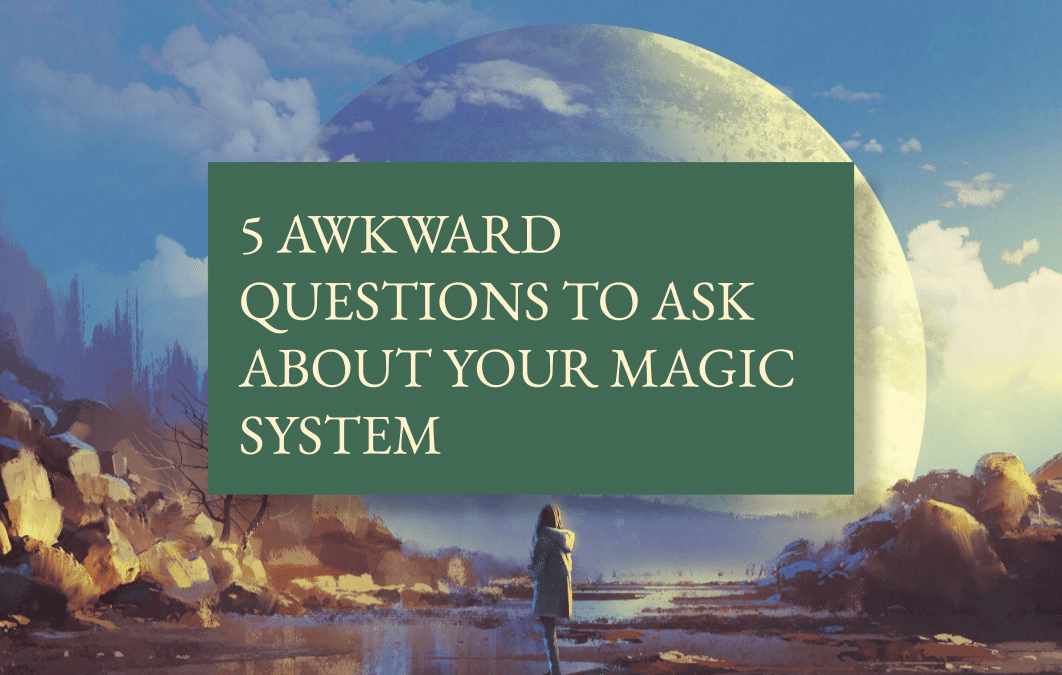 Magic is the exclusive domain of fantasy and a cornerstone of our genre. So it makes sense that when worldbuilding, this is something you need to spend a bit of time on. A perfectly designed system of magic might just pop into your head while in the bath… or it might involve a lot of crumpled up bits of paper and a fair bit of crossing out and swearing. Either way, it must be done.

And it must be done well. Readers can forgive a lot of things – inexplicable geography, for example. But while readers might gloss over the fact that it doesn’t make scientific sense for there to be mountain ranges in that part of the world, they are unforgiving when it comes to sloppy magic. They read fantasy for the fantastical, so it is important to get it right and ask yourself some tricky questions.

Why doesn’t everyone do magic?

OK, I stole this one from an interview with Terry Pratchett I read once. But if you’re going to steal from anyone, he’s the bloke to steal from. Wizards and witches on his Discworld don’t actually do a lot of magic – because it’s so dangerous! ‘Messin’ with reality’ can have unfortunate side effects, including, but not limited to, unstable morphic fields, blowing stuff up, and summoning the ‘things’ from the Dungeon Dimensions. Several of his books explore the theme of ‘too much magic’.

And even when Pratchett’s magic doesn’t affect the world around the characters, it takes a toll on the characters themselves. Granny Weatherwax, the most powerful caster on the Disc, is particularly loath to use magic to solve problems due to the risk of going ‘Black Alice’ – e.g. cackling madly, living in a gingerbread house, and getting shoved in your own oven. Granny only uses magic when she really has to, and when she does, it stands out in the narrative.

But danger isn’t the only reason that magic might be available but not commonplace. A character’s skill is another potential limitation. If magic takes decades of intense solitary study, it won’t be too widespread, no matter how potent it is. If magic takes skill to learn, it’s also worth thinking about what kind of skill. Is it just saying the exact words and gestures? Or is there a certain mental rigour and spiritual shielding that needs to be developed, like muscle memory in a swordsman?

Bloodline is another option. The ‘Harry – yer a wizard’ line from Harry Potter springs to mind. Magic being a genetic gift (or curse) is a classic fantasy trope. If you play Dungeons & Dragons, think of the Sorcerer class. A Sorcerer draws power from their ancestry (normally, Great-Grandma shagged a dragon/fae/demon or similar). If you don’t have ‘magic blood’, you can’t cast Sorcerer spells.

A different Dungeons & Dragons class is the Warlock. Warlocks get their spells from a patron, to whom they have sold their soul or otherwise pledged loyalty. Michael Moorcock’s Melnibonian nobility, summoning up demons and swearing infernal pacts in exchange for power is another good example. In such a scenario, magic is only accessible to those it is granted to and comes, of course, at a steep price.

Finally, you can also turn this question on its head: have it so everybody does do magic. This was an idea explored in the roleplaying game Runequest. Every character, no matter their background, knows a couple of spells. Some casters are more powerful than others, of course. But even the average peasant can whip out a Bladesharp to make cutting the woodpile go a bit quicker.

This is a ballsy option. It means that magic, by definition, will saturate your world and change how characters interact with each other on pretty much every level.

This brings me neatly to the next point:

What can it do?

You don’t need to write out every possible incantation, but you need to have an idea of what a magic-user is capable of. Sometimes magic can be very subtle. Look at the iconic Gandalf. Gandalf’s spells are not big and flashy. He sets fire to pinecones to panic and enrage the wargs, rather than launching a nuclear-winter-style blast of magic. He uses magic to gain information, to inspire and terrify, or to give himself an edge. However, he doesn’t use it as a crutch. If you take away his spells, Gandalf is still a potent swordsman and cunning leader.

Restricting what magic can do not only makes it more special when someone does use it but also forces your characters to rely on their other skills. No one wants to read a book about a wizard who blasts his way through the entire world before tea-time and always has the right spell for any situation. You don’t need to give hard and fast borders, just a general idea of the type of magic available in your world.

And keep it consistent. This might seem a bit contradictory for magic – by definition, you’re creating inconsistencies within conventional scientific laws. But hear me out. If your readers are used to magic users in your novel being subtle manipulators, using magic to tweak people’s emotions and read thoughts to control complex politics, it will clash hideously when they blow up a castle by pointing and shouting ‘Bang!’

Once you figure out what magic users can do in your world, you need to have a serious think about the next logical question: how much they had to pay for it.

What does it cost?

In the words of Rumpelstiltskin in Once Upon a Time, ‘All magic comes with a price.’

As well as considering how difficult it is to learn magic in the first place, think about what casting spells does to your protagonists.

As we touched on earlier, the long-term effects of magic use on the Discworld can send people a bit peculiar. Black Alice and Lilly Weatherwax (Granny’s sister) are both powerful witches who went insane after using too much magic to ‘fix’ things. Risks like these make magic far less of a point-and-click system and instead something to be feared and treated with caution.

In classic sword-and-sorcery fantasy, almost all mages are cruel and devious individuals, such as the coven of wizards in The People of the Black Circle or the terrifying Thoth-Amon from Robert E. Howard’s Conan stories. Even if your magic users aren’t evil, as they wield magical power over the course of the book, think about what that will do to them psychologically. Even the ‘nicest’ wizards tend to end up a little… odd. Comes of discovering too much forbidden lore than man was not meant to know, I suppose.

Ironically, scientific laws can provide inspiration here. Give yourself laws and rules to abide by. In my novel, Brigandine, magic relates to the humours of the body. If you want to influence emotion, you need blood – and plenty of it.

You can’t create something from nothing.

All magic will create feedback of equal energy.

What goes around comes around.

These are all solid principles to consider.

After you’ve thought about what magic can actually do in your world and what price is paid by the casters, you can start to look at how that would shape the world.

What are the technology implications?

Gandalf’s fireworks are an easy example. If you have a wizard who enjoys shenanigans and can create coloured fire at will, it stands to logical reason that they will use it to show off at parties.

More seriously, let’s say you have a spell that makes people younger – everyone in the world will want some of that! But let’s say that only the nobility can afford it. You’ve then got a system where nobles aren’t dying and leaving their lands to their children, who in turn are probably having more children of their own. So, you have a ruling class who will have been in power for possibly centuries, as well as a bloated upper class competing for the limited resources of titles and land.

Instantly, you can see the implications of that spell. For stories in which magic is common, you could expect to see the fantasy equivalent of many modern items. A spell that creates permanent flames could make perfect streetlamps. Courts could use Binding Oaths to ensure no falsehoods were spoken. Magical alarms could protect homes.

But, however you do it, know that there’s nothing new under the sun.

Is your system actually unique?

There is nothing wrong with being inspired by the magical systems of other writers and using them in your own book – with suitable tweaks, of course.

Wizards get spells through intense study, and only the very strong-willed can master magic, calling on the forces of the elements to do their bidding.

There. I just came up with that now, but I’d bet my collector’s edition of The Hobbit that there are dozens of novels out there where magic works that way. Magic exists. Only smart people can do it. It takes ages to learn. It uses the elements.

But if you picked up a book that used this style of magic, it probably wouldn’t seem hackneyed or too cliched – just, well, like fantasy. Even within the well-worn, there’s a lot to play around with.

TTRPGs (tabletop role-playing games) and some of the better computer games can also serve as useful inspiration.

Just respect the copyright on any spell names!

And remember: your writing does not exist in a vacuum. Readers read around the genre just like you do and will notice if something is off. If you create a magical system where protagonists cast spells by waving wands and shouting pseudo-Latin, people are going to think you’ve ripped off Harry Potter.

That’s just the way it is.

Have fun with it! Magic is what makes fantasy the most fun genre to write and to read. Having the entirety of creation at your fingertips can be a bit daunting. But scribble down some ideas on a notepad, and get cracking.

Jack Shannon is a guest contributor to Fabled Planet. He is the author of Brigandine – a dark, bloody fantasy where, unfortunately for Ulf (and everyone else), magic is returning to the land of Ashenfell. It has quite a few sword fights and a healthy dose of Lovecraft. He is currently seeking representation. Why not give Jack a follow on Twitter? @Jack_Shannon