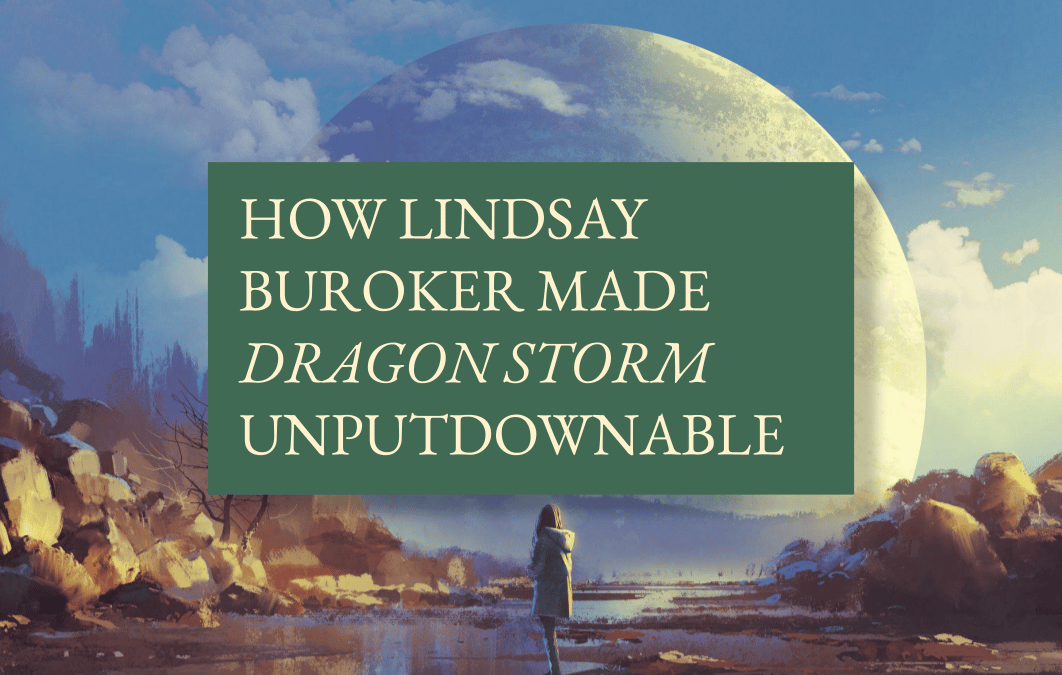 Getting lost in a world of your own making is part of your job as speculative fiction writer. But to help your readers to settle into your world as comfortably as you do, you’ll sometimes have to step back from your story’s detailed worldbuilding and life-and-death conflicts and ask, ‘What am I doing to make sure readers even get this far into my story?’

What makes a book unputdownable?

Having written over sixty novels, made it onto the USA Today bestseller list, and been twice nominated for a Goodreads Readers’ Choice Award, independent fantasy and sci-fi author Lindsay Buroker has a thing or two to teach any writer about this question.

Dragon Storm, the first book in her Heritage of Power series, has the addictive pull of a good film watched at the cinema. By the end of the first chapter, Lindsay has introduced us to her air force pilot protagonist, Trip, as well as his strengths and weaknesses and his world – all in the middle of a high-stakes aerial battle against dirigible-sailing pirates!

And by the end of the novel, Trip’s journey is just beginning, and we have to resist the temptation not to immediately click ‘Buy now’ on the next one and keep reading, mundane duties and obligations long forgotten.

So how does Lindsay do it? While I’m sure there are a number of magic ingredients involved, here are a few I noticed as I read Dragon Storm.

The protagonist of Dragon Storm, Trip, got his air force nickname – ‘Sidetrip’ – thanks to the traits that make him a great, if difficult, pilot: he follows his eerily accurate hunches on daring side-trips in the middle of a mission to help others. Meanwhile, deuteragonist Rysha doesn’t let her eyeglasses (which were the cost of years of reading) get in the way of being a great soldier – in fact, her scholarly knowledge and athletic ability are an unexpected combination that make her a great asset to the military. Every member of the cast, while complex, has at least one trait that crops up again and again, making it easy to remember who’s who and quickly get to know them.

In striving to portray our characters in all their complexity, we writers can overlook the importance of clearly assigning each one a set of intuitive, consistent traits that make it easier for the reader to get to know them.

Limit and maximise your points of view (POVs)

These days, it’s common in speculative fiction to have as many as six (or even more) recurring POV characters. While this is certainly doable for some authors and stories, Lindsay challenges the notion that more is better. Dragon Storm has just two POV characters – protagonist Trip and his mission teammate and love interest, Rysha – with the chapters alternating between them.

How does this contribute to making the book unputdownable? Two reasons. The first is that readers have an easier time putting down – and possibly not returning to – a book when given a convenient break.

If I start the next chapter, they think on some level, I’ll have to remember what was going on with this character I haven’t heard from in a while, get used to her narrative voice again, recall the names of all her supporting characters. Come to think of it, I didn’t like this character much, and now I’ll have to wait however many chapters to get back to someone I do like. Maybe I’ll come back to this book later…

Of course, plenty of readers will still read on despite the shift, but the more POVs you ask them to keep track of, the easier you make it for them to walk away.

The second is that when there are fewer POV characters, readers are more likely to get invested in them. Because we stay with Trip and Rysha throughout the novel, we have plenty of time to get to know them and settle into seeing the story world through their eyes. We enjoy the other characters, too, but Trip and Rysha are our anchors.

Give the whole series a clear goal

When you’re writing a series, making a story unputdownable also means ensuring that the reader overcomes the biggest obstacle of all to finishing the story: picking up the next book.

Lindsay makes that easy for her readers. Dragon Storm covers only the first leg of the characters’ larger mission to find and destroy the portal that’s allowing vicious dragons into the human world. In this book, their mission-within-the-mission is the capture of a portal-destroying magical sword from a pirate king.

The overall mission, then, is clearly stated but left incomplete. As a result, readers know what to look forward to in the next novel, giving them a concrete reason to pick it up.

Contrary to popular belief, it’s not quite true that readers like having no idea of what’s coming next. The twists and turns of plot are enjoyable only when readers have some idea of where the overall story might be going (even if a clever twist proves them somewhat wrong in the end!). Set that up in first book, and you invite them along on the whole journey, not just around the next corner.

In addition to setting up the ultimate goal of closing the portal, Dragon Storm also drops many seeds of conflict along the way:

In a world where magic users are discriminated against, Trip discovers a variety of magical abilities he didn’t know he had, and all of them have the potential to get him in trouble…

Just as Trip and Rysha become aware of their romantic feelings for each other, Rysha becomes the wielder of a magic sword that desperately wants her to kill him…

One member of their team comes from an enemy land, and his battle lust and secret sorcery make him impossible to trust…

And many, many more.

None of these seed conflicts break through the soil in Dragon Storm, but we can already sense that they will in later books – giving us even more to look forward to.

Humour is subjective and takes practice, and not all readers will appreciate your specific type or frequency. But that’s no reason to forgo it entirely. Dragon Storm is an epic fantasy with all the life-and-death stakes and action usually inherent in the genre – but Lindsay makes plenty of room for banter, characters making jokes at each other’s expense, and, appropriate to a novel about a squad of soldiers, lewd sex jokes.

In doing so, she reminds us speculative writers that no matter how serious the conflicts or solemn the world, readers still expect to have fun while immersed our stories. Humour is an excellent way to make sure that they do – and that they learn to associate our characters with positive feelings. It’s hard not to like someone who makes us laugh.

Readers can’t fall in love with a story if they don’t reach the end, making ‘unputdownability’ one of the key factors in novel-writing success. It’s also, however, not something most writers can learn from a craft book or by instinct alone. That’s why it’s crucial to reading the work popular authors like Lindsay and notice how they do it – and if the book is truly unputdownable, you’ll have fun in the process.